On April 23, 2017, over 300 barrels of black crude leaked into the Gulf of Paria from Petrotrin’s Pointe-a-Pierre refinery. It drifted and arrived here in Aruba at the end of May. Luckily, the island’s tourist beaches dodged the bullet. Instead, the oil balls hit the beach on the wild side, spreading gook on the beaches from Santana Cacho to Cap, located just before Andicuri.

Arikok National Park announced six cleaning actions, and we signed up for the last one on June 25. I posted a message to recruit volunteers, and we had a great response. We met up at Boca Grandi for a post oil spill beach cleaning at 7 am. 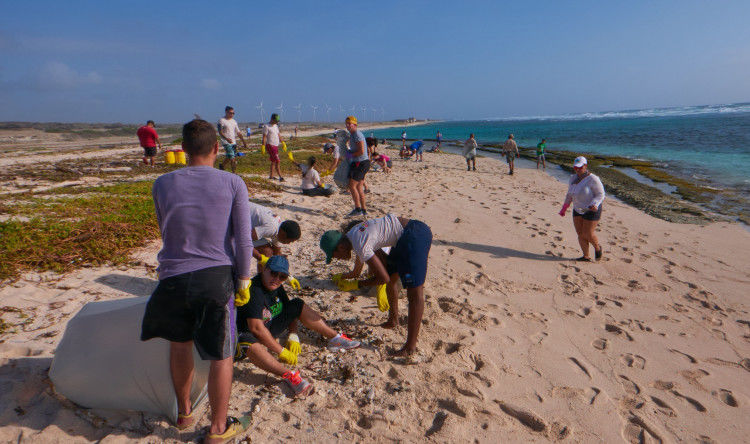 Carl Quant from Arikok coordinated the effort. He brought some of the rangers along, Jentje and Acuario, two big sweethearts. They were well organized, getting us to park one place and shuttling us to the area we were assigned to, Rincon. For three solid hours, the beach had dozens of people cleaning, and we made a difference.

Rincon is a most gorgeous stretch of white beach, at the end of Grapefield Beach, halfway between KIA and the windmills.

Thank you Carl, Jentje, and Acuario for an excellent job. Imagine, Carl started working for the park the day the oil balls hit the shore, and he hasn’t stopped cleaning since.

Thank you Shoco Beer for providing delicious cold ones for the crew. Long Legged Lager and Blood Orange Blond taste incredible at 10 am after three hours of bending. We also stopped at Kamini’s for lunch, which complemented the Sunday morning experience.