A half or full day of sightseeing can easily be filled with a visit to any number of the following churches, museums, ruins, historical sites, and other iconic landmarks and architectural attractions.

Early in the 18th century, a small group of Catholic natives settled an area to the northeast of the town of Noord.  They would gather to pray high on a hill overlooking the north shore, and in 1750, the island’s first Roman Catholic church—the Alto Vista Chapel—was built at this spot.  Reached by a windy road lined with the Stations of the Cross, the picturesque chapel now serves as a unique retreat where locals and island visitors can spend a moment or two of peaceful contemplation.

At the northwestern tip of Aruba, the California Lighthouse overlooks the area known as Hudishibana from its post at the top of a limestone plateau.  The 100-foot-tall stone lighthouse was named after the steamship California that sunk in 1891 in the waters nearby.  Visitors who make the short drive up the hill to the lighthouse will be rewarded with a spectacular panoramic view of the Caribbean Sea, battering against the rocky north coast and then settling into a calm stretch of turquoise as it wraps around the west coast.

Originally built in the Netherlands in1804, this windmill was shipped to Aruba in pieces and rebuilt in 1961 between the island’s main boulevard and the high-rise hotels of Palm Beach. In addition to paying homage to Aruba’s Dutch heritage, De Olde Molen houses a restaurant that has changed ownership over the years. 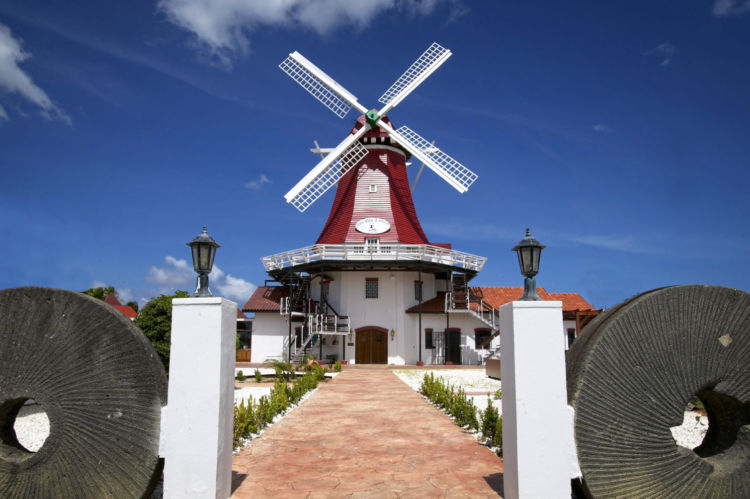 Aruba experienced a gold rush during the 19th century, with the discovery of gold on the island first documented in 1824.  In 1874, an English mining company built the Bushiribana Gold Mill on Aruba’s north coast in order to process the gold ore extracted from the hills nearby.  A team of local masons was hired to assemble the old-fashioned mill using primitive cranes of wooden beams to lift the massive rocks into place.  Today, locals and island guests can enjoy exploring inside the Bushiribana Ruins, which provide an excellent vantage point to quietly observe the surrounding rugged terrain and the stunning Caribbean Sea.

In 1899, another gold mill was built, but this time, one with a better connection to the sea via railway lines. The Balashi Gold Mill Ruins are the last vestiges of this mill that once processed gold ore at the southern end of a narrow canyon called Frenchman’s Pass. Visitors will enjoy picking their way through the ruins, and those who climb the stairs to the top of the bluff will be rewarded with a stunning view of the tidal flats and mangrove forests of the Spanish Lagoon. Keep an eye out for a variety of bird species such as bananaquits, Aruban parakeets, herons, troupials, and common ground doves in this wetland area, which is now protected as part of Arikok National Park.

The same waters along the Malmok coastline that were once fished by the Island’s earliest Indian communities are still being fished today by a group of about 50 local fishermen who have formed a foundation known as the Stichting Fundacion Centro di Pesca Hadicurari.  The foundation is headquartered at Hadicurari Fisherman’s Pier, located between the Marriott’s Aruba Surf Club and the Holiday Inn Sunspree.  Foundation members sell their just-caught fish right off the pier, with local restaurants buying up the majority of this fresh seafood.

Halfway between Baby Beach and Colorado Point at Aruba’s southern tip, the Pet Cemetery was begun by the residents of the old Lago colony nearby.  Within this wind-swept cemetery right along the sea, driftwood crosses mark the final resting places for beloved pets, some of them bearing curious epitaphs worthy of reading. It is now illegal to bury pets at this well-known cemetery. 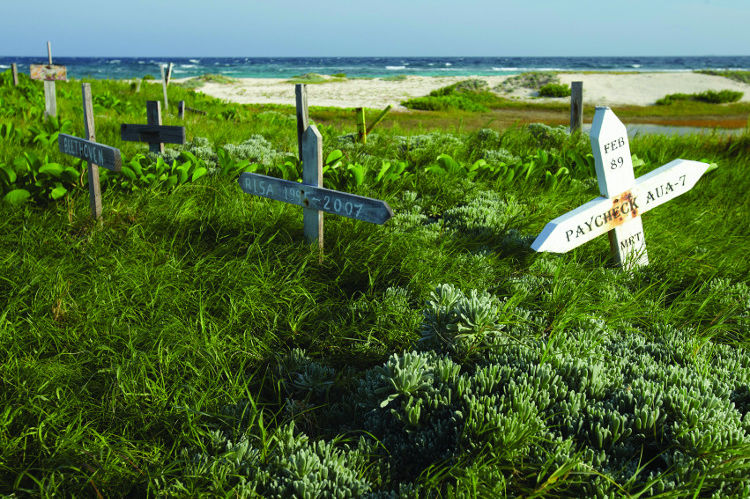 Built in 1846 on Wilhelminastraat in the heart of downtown Oranjestad, the old Protestant Church is Aruba’s oldest original house of worship.  Although somewhat dwarfed by the new Protestant church that sits just next to it, the older church stands out in its own humble way with traditional wooden shutters, a square tower adorned with simple folk art, and the Dutch tile tableau in the portico.  The terracotta roof tiles, as well as the pews, organ, and chandeliers inside, were brought from Holland. 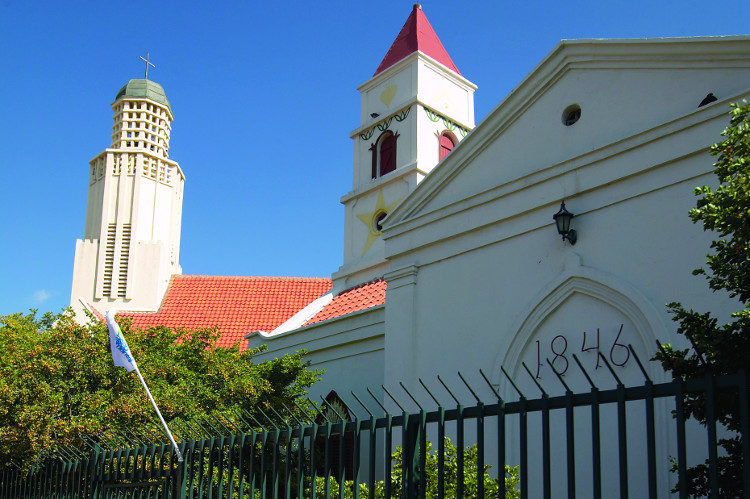 When Santa Anna Church was built in 1776, it served as the Island’s second most important religious meeting place—the first being Alto Vista Chapel.  Located in the town of Noord, Santa Anna Church was rebuilt twice in the 19th century and was last renovated in 1916.  Today, the Roman Catholic church is most famous for its solid oak, hand-carved, neo-Gothic altar, which won an exhibition award in Rome in 1870.  Offering masses in both Papiamento and English, Santa Anna Church is especially popular with island visitors.

Lourdes Grotto is a Roman Catholic shrine located at Seroe Preto (Black Hill) near San Nicolas.  In 1958—to commemorate the reported appearance of the Virgin Mary in Lourdes, France, 150 years earlier—a San Nicolas preacher and his parishioners hoisted a statue of Mary into the hill’s limestone cave.  The grotto is a favorite place to pray, with a mass celebrated here each year on February 11, the Feast of Our Lady of Lourdes. 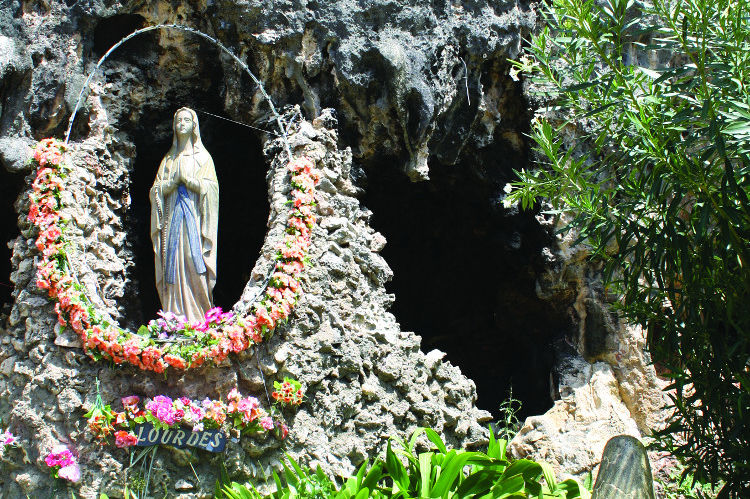 These icons of local culture have been around for decades, with the Aruba Rum Shop and White Star rum shops in San Nicolas among the oldest on the Island.  Just as they’ve always done, rum shops serve as local watering holes where friends and strangers alike gather to discuss the day, catch up on local politics, or just “shoot the breeze” around the tiny bar.  With its laid-back, devil-may-care atmosphere, the Aruban rum shop is the perfect place to unwind with a rum-and-coke (or two) or an ice-cold beer (or two).  It’s also a great place for island guests to mingle with the locals.

Located in the sleepy fishing town of Savaneta, Zeerovers is a fisherman’s wharf-cum-roadhouse promising a heavy dose of local flavor.  A counter near the entrance sells fresh-caught fish to go at local prices.  Patrons can also have the fish prepared on the premises and then enjoy it on the waterside deck among the seasoned locals playing pool or dominoes and discussing the latest town news over a few ice-cold Balashis.

This pretty Aruban-style mansion on Wilhelminstraat was constructed in the 1920s as a residence for the late Dr. Eloy Arends and his well-to-do family. In 1998, the property became the first building to be restored by the Monuments Bureau of Aruba and has since served as the City Hall, or Stadhuis, of Oranjestad. With its Dutch colonial design, colorful facade, white trim, and charming decorative detail, the City Hall building is a fitting venue for civil marriage ceremonies. 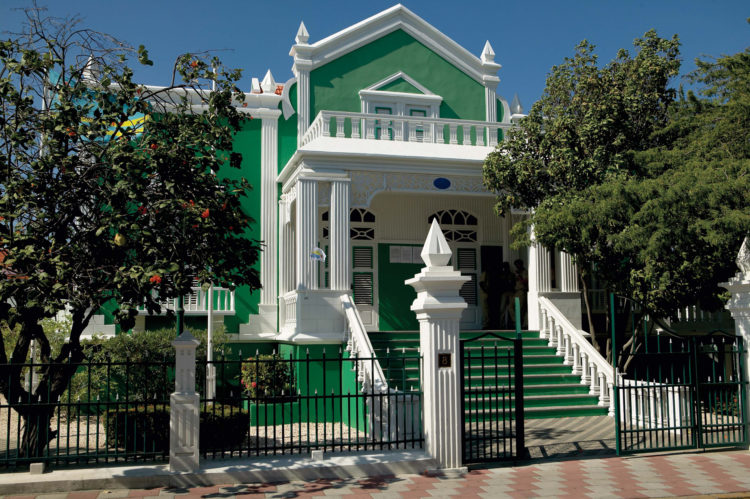 Situated across from the cruise ship terminal in downtown Oranjestad, Royal Plaza Mall has become iconic for its Dutch colonial architecture. The mall features a number of boutiques and a few restaurants, as well as a beautiful open-air courtyard with a selection of local crafts and benches to sit, relax, and enjoy the refreshing Aruban breezes. 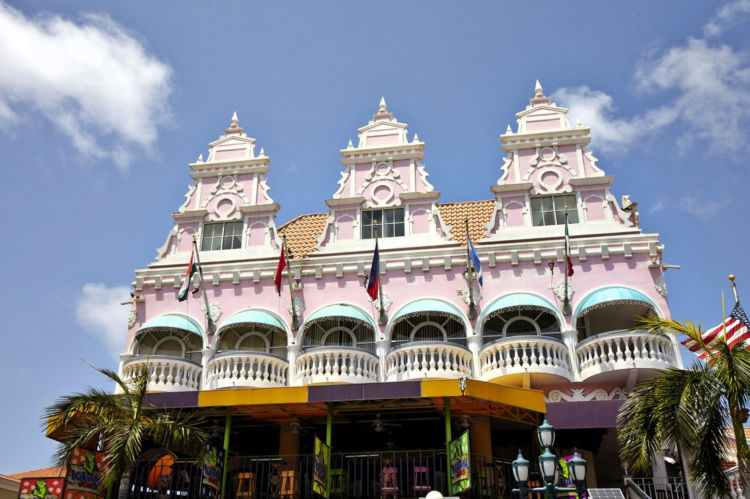 In 1798, Fort Zoutman was built in Oranjestad to protect the neighboring harbor from marauding pirates and other enemies. Today, the restored fort stands as Aruba’s oldest building and, together with the Willem III Tower, houses the Historical Museum, which highlights the history and development of Aruba up to the 1920s. Every Thursday evening, Fort Zoutman hosts the enchanting Bon Bini Festival, wherein local performers regale island guests with traditional Antillean dances and live steelpan music under the open night sky. 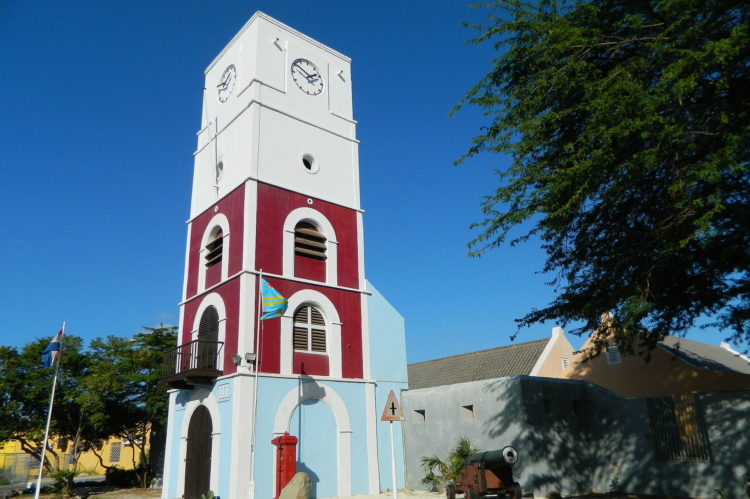 Originally built in the heart of downtown Oranjestad in 1929, the longtime home of the Ecury family serves as a national historic monument. It was beautifully restored and seamlessly integrated with a new state-of-the-art facility in 2006 to accommodate the Archaeological Museum of Aruba. The national museum preserves and documents the three periods of Amerindian inhabitation on Aruba between 2500 BC and 1880 AD. While a vast collection of Caquetio Indian artifacts helps illustrate the daily lives of these early people, the museum is also equipped with interactive educational technology that appeals to modern audiences.