The Renaissance Mall hosted the official opening of the first NAUTICA CITYSCAPE concept store in the Caribbean. The store has been open on the island since October 2017, and it carries the line’s world-renowned beach and sailing wear, office wear, evening wear, and accessories. NAUTICA Aruba offers an exciting collection for every member of the family. For the Spring 2018 season, Nautica explores the scenic coastlines of California and highlights its heritage in a mix of performance wear, classic prep, and traditional nautical style.

Founded in 1983, Nautica is a leading global lifestyle brand of apparel and accessories for men, women, and children. “It is today one of the most recognized American brands throughout the world, available in more than 75 countries with 236 full-price Nautica stores and close to 3,000 Nautica-branded shop-in-shops worldwide,” says media contact Michel Somford, who oversaw the opening here in the presence of fashionistas, press members, and clients, who were treated to an evening of cocktails, hors d’oeuvres, and live DJ mixing. 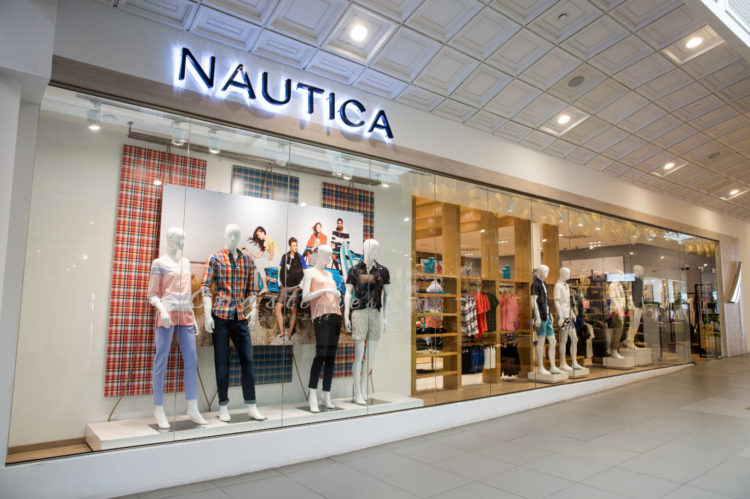 Our National Library issued a bulletin this week announcing the launch of a new book, Caribbean Crossroads, by Charles Croes. Written in English, the book was inspired by true life events and takes place in Aruba and Venezuela.

While Charles insists he is not an author or writer, he likes telling stories and putting them down on paper, and during the past two decades, he nurtured a loyal local audience via Facebook posts and during performances at Poetry Night. His narrative is always introspective and personal, and the words flow beautifully to form a stream of familiar thoughts and universal questions. 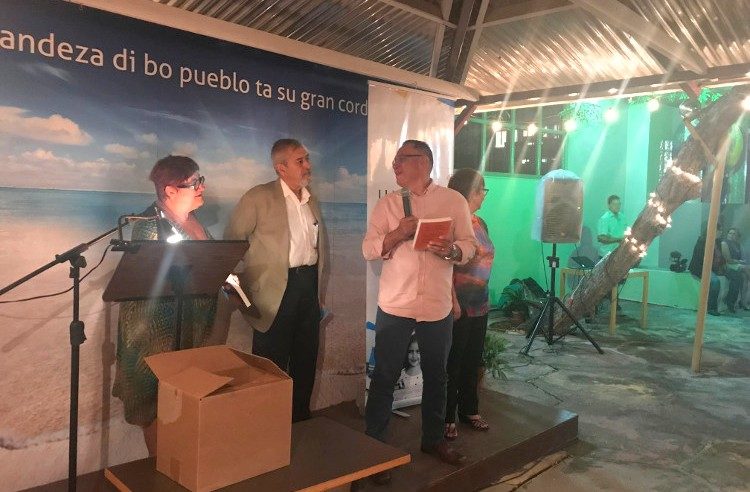 Charles reports that his book was born in Venezuela, on a trip deep into the country where he met a young boy, a goat herder whose family also dipped into artisana making rustic clay tiles, which Charles was about to buy and use for the construction of his home in Aruba.

That ten-year-old whose world revolved around his goats, the pasture, and his modest boondocks village, became the protagonist of a book Charles has been writing for five years. It is a journey of self-discovery as the boy moves from his early childhood dust bowl to the Caribbean, experiencing life’s many challenges and heartbreaks.

Charles explains that the story is woven together from many real-life threads. Logic and careful development of characters are not the book’s strongest suits, but the mystical poetic Caribbean folklore is ever-present. Available in all local bookstores.

“Aruba’s Vacation Station,” Magic 96.5 FM, will be gifting a car to the last man or woman standing when the Hand-A-Thon 2018 3D unfolds Aug 30 – Sept 2 at the Entertainment Center, celebrating the station’s 20th anniversary. One dozen able-bodied listeners will be chosen from among the station’s large audience. They will be placing their hand on a car, a brand-new Chevrolet Aveo 2018, sponsored by Stern Automotive Enterprises, for a minimum of 65 hours. The endurance contest has strict rules and regulations, judges, and officials. The twelve contestants will be selected in collaboration with the promotion’s branding partners: Aruba Bank, ATCO Concrete, Subway, Kok Optica, Smart Systems Aruba, Superfood Plaza, Nagico Insurances, Bohama NV, Smit & Dorlas, Setar NV, and Tropical Bottling. The station organized similar promotions in past years, giving out a car and even a house for its 10th anniversary. 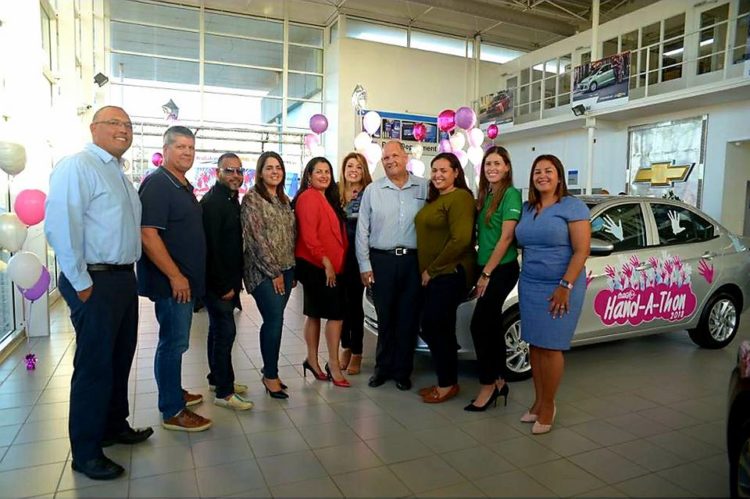 Aruba Airport Looking Out for the Shoco

When certain construction projects were about to start at Aruba Airport, the construction team spotted two shoco nesting sites in the middle of the construction areas. AAA sent a petition to the Minister of Spatial Planning, Infrastructure, and Environment with the request for permission to have the shocos relocated and was granted an exemption for the relocation.

AAA has been working together with the Aruba Birdlife Conservation (ABC), which was requested to investigate the situation for potential solutions. ABC, which works together with Arikok National Park, helped make funds available to the park to be able to work on shoco conservation. The park, in its turn, managed to contact the most experienced burrowing owl experts in the world to advise on shoco conservation.

The Aruban burrowing owl exists only in Aruba, and Aruba Airport felt responsible to ensure their safety and the safety of all its passengers who visit the island. 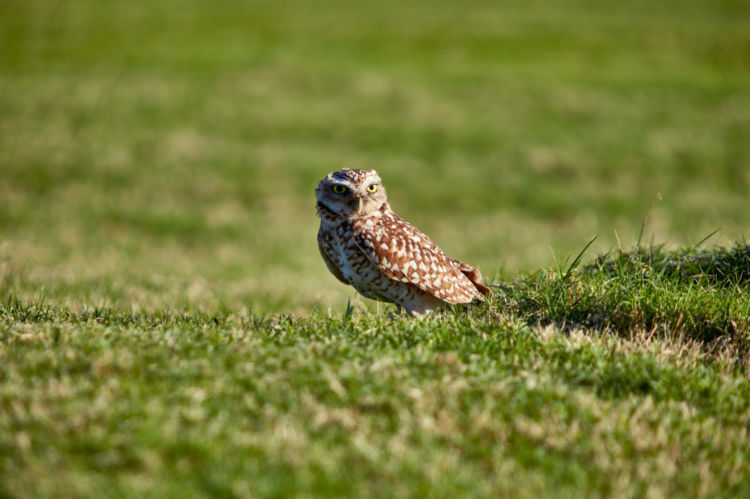 Indian-food lovers should be pleased to hear that a little lunchroom just opened at Sun Plaza Mall serving Surinamese sandwiches and roti—four kinds as platters and wraps, with chicken and a vegetarian choice. Roti (also known as chapati) is a flatbread native to the Indian subcontinent made from stoneground wholemeal flour and water, combined into a dough. Roti is popular in India and traveled with the Dutch colonials to Suriname, and then to Aruba. We are crazy about roti, escorted by curry chicken, sauce-soaked potatoes, and over-cooked vegetables.

You can have a modest salt-fish, sardine, or sausage sandwich at Roti Mahal, or the more elaborate platters, like brown beans and chicken, or the Indonesian-inspired nasi (rice) and bami (noodles)—they all emerge from a tiny kitchen. Sometimes there is waiting time involved because the offices overhead at Sun Plaza order takeout!

Try the bacabana (fried plantain with spicy peanut sauce) or the samosa (baked triangles with savory fillings). Pom, a classic festive dish made of elephant-ear “taro” root, is also yummy. 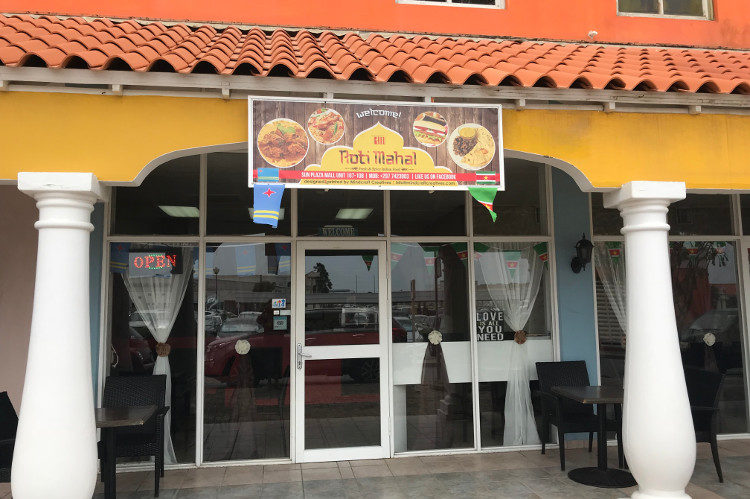 I recently attended a Carrying Capacity Conference at the MFA, the Multi-Function Center in Noord, hosted by the Aruba Tourism Authority. There were about three dozen locals in attendance, all concerned citizens, some representing environmental foundations, which proves that the majority of islanders are not really aware of the need for them to speak up and express their opinion, or come up with their “mira pa futuro,” their vision of the future. They are too busy making ends meet and do not have the time to question anything. Thus, it is the responsibility of those who can spare a minute to speak up in the name of the silent majority.

The well-meaning gathering presented a series of multiple-choice images of Aruba’s iconic landmarks: Alto Vista without people, some people, and multitudes; Eagle Beach with three sun worshippers, a modest group, and busloads. We were asked to pick the image we can live with: a minimal amount of people, a modest number, or a mob. Most people indicated they would like to have people around, but in moderation. 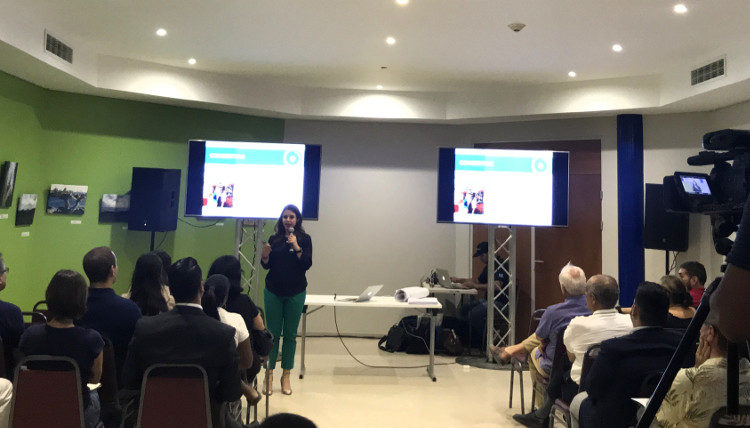