The farewell reception of the recent Annual Tourism Conference featured a charming idea, a mini Food Truck Festival on the plaza in front of the Archaeological Museum. Invited guests were greeted with a mojito-filled mason jar with the Aruba logo and a logoed purse containing tokens, the required food truck festival currency.

While musician Dave Cousins and his band rocked the night, conference-goers explored the local street fare in the historical downtown plaza.

The setup by Elite Productions promoted Machika, a famous Mad Max-inspired music video that conquered the world in early 2018. The video features local talent Jeon Arvani in collaboration with the king of reggaeton, J Balvin from Colombia, who extended his fan reach by also including Anitta, a Latin pop diva from Brazil, in the creation of the blockbusting music video. 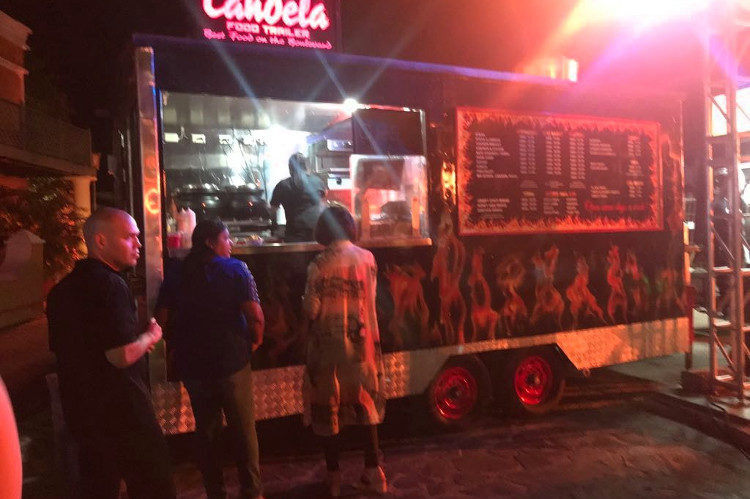 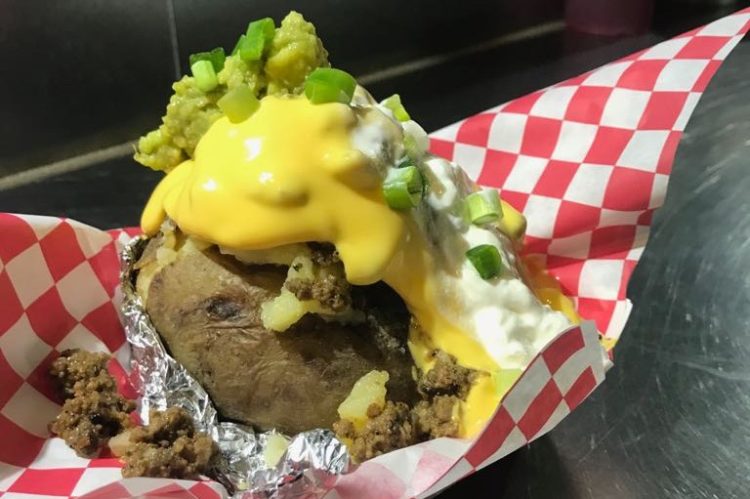 Five food trucks and two dessert options gave guests plenty of choices. Both Burger Joint and Candela enjoyed a nice mix of clients. Candela’s cheese steak with pickled onions garnered many fans, while the burgers from the Burger Joint, especially the “crioyo” version with a fish cake on pan bati, were a hit. Popular El Mexicano and the Italian-accented Eataly drew an appreciative, hungry crowd. Piet’s Truck introduced the visitors to his much-loved French fries drenched with satay sauce, a temptation no local can resist.

The Little One, a vintage red Volkswagen, offered Hollywood Smokehouse’s homemade brownies topped with vanilla ice cream and the local ponche crema liquor for dessert. Those in search of adventure were invited to try the blackberry bourbon lemonade, Hollywood’s signature cocktail. The Pofferdorie served tiny Dutch pancakes adjacent to the ice cream truck, which concluded the unique experience with a sweet treat.

Emceed by Mark Benson and organized by the Aruba Tourism Authority’s Glenny Tromp, the event promised an unforgettable night under the stars. 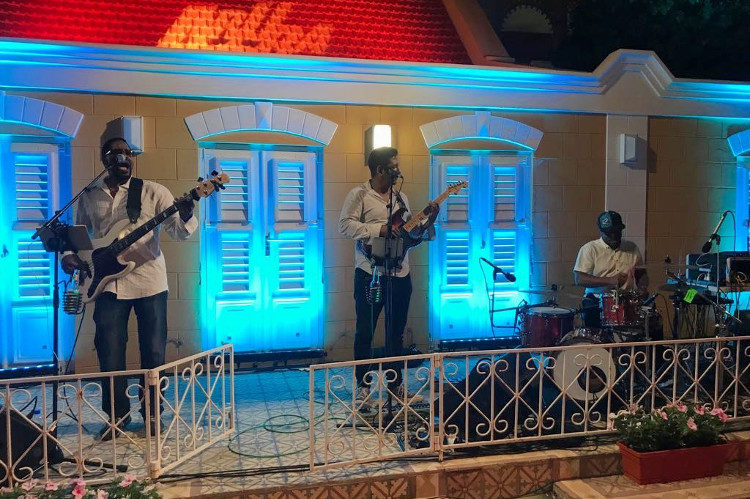 Balashi Beer recently introduced its new look at a rebranding event at an abandoned cunucu house in Koyari, totally decked out and illuminated by Elite Productions and Balashi National Brewery.

The country home’s shell was digitally mapped green with hex signs, with the cactus and aloe glowing blue in the garden. Guests were invited to go wild in the photo booth, then take a virtual tour of the brewery inside the structure covered with digital wallpaper and decorated with a charming Balashi bottle wall and great displays.

The Balashi rebranding party followed the rebranding of Balashi’s baby sister, Chill, during Carnival in February.

Balashi was given a new look and a new tag line, ARUBAN AT HEART, reflecting the fact that the beer’s ingredients are imported from Europe, but the bubbles are made here. The term is also inclusive towards our many loyal visitors who are Aruban at heart, drinking Balashi on our beaches, willing to belong, even just for a week, to One Happy Island.

The music at the event, provided by Michael Lampe, was very special. Lampe is a local member of Parliament who prior to joining a political party, enjoyed an excellent career as a music producer and DJ in Europe and on the island. His specialty? Mixing old and new genres of Aruban music and taking the age-old tambu and caha di orgel—music box ditties—and turning them into fresh and exciting productions. Lampe explains his creative process as an “absorb, restructure, and put out” cycle, marrying traditional and electronic music into a Caribbean sound with a contemporary groove. 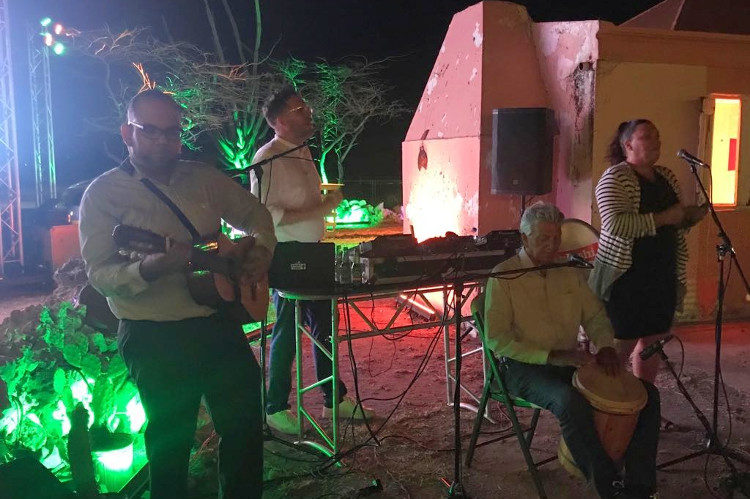 For the Balashi event, he featured 88-year-old Vicente Ras and his vocals and percussion combo, Sodo di Cuero, on strictly acoustic instruments. The old-fashioned evocative sound was received with great appreciation and nostalgia for the sweet, melodious, and innocent, almost extinct, island culture.

Lampe explains that he continuously brings old proverbs back to life and listens to the way old folks talk, allowing things to evolve and go to the next level in order to achieve a new interpretation of culture. In the Netherlands, Lampe is known as “Fellow,” a producer/composer in the club dance scene creating interesting remixes of reggae, reggaeton, house, and techno music. “Music is like water,” he says. “Gotta let it flow.”

Balashi in a Nutshell: The brewery is one of the most modern production facilities in the Caribbean. The beer is crafted according to traditional German methods with a local twist. Add world-class water, premium barley and hops sourced from Europe, sustainable production elements such as food for local livestock and returnable bottles, and tada—you have Balashi, our local island brew made with passion and quality!

The largest group within the first edition of the KLM Aruba Marathon, held in the early morning hours of Sunday, June 3, 2018, with the start and finish on Palm Beach, belonged to the Aruba Growth Fund. The group consisted of 170 colleagues, participating in every category and posting impressive results.

The Aruba Growth Fund, established on the island in 2012, is the first Aruban private equity fund. It received its initial funding from the main Aruban pension funds, which explains the slogan on the race day shirts: On the run, Aruba Growth Fund, owned by more than 20,000 Arubans.

With this initiative, AGF wished to promote the importance of a healthy lifestyle among its team members.

Pictured here are participants hailing from all company outlets at the finish line on race day, enjoying the unique setting at the end of the satisfying sporting event, with walkers and runners from all around the world. 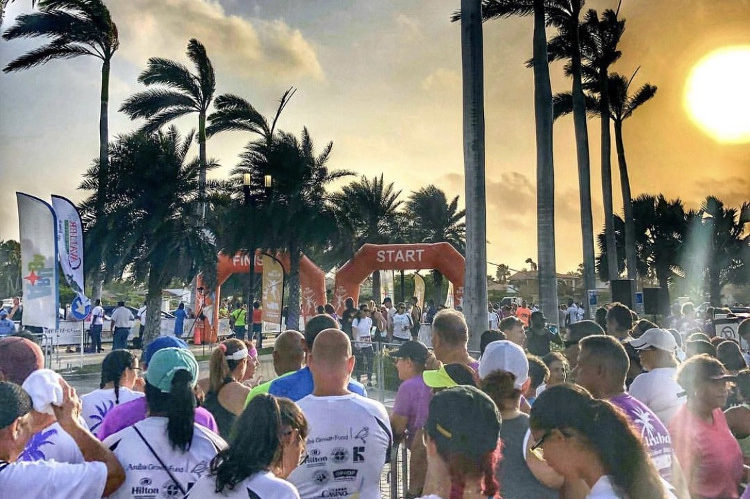 T.H. Palm & Company hosted its 4th annual Father’s Day event, celebrating some of its favorite male clients and showcasing its fun selection of clothing and gifts, especially for men. There was a decidedly male vibe as invitees shared refreshing mojitos and bite-size hors d’oeuvres, paired with plenty of banter and conversation, while perusing the newest offerings at the famed Palm Beach boutique.

Store owner Jodi Tobman explained that she created the event around her male clients to celebrate Father’s Day and the masculine point of view for the day. Her strategy worked, and she was rewarded with the presence of many of the island’s movers and shakers, who lingered over cocktails, enjoying the unique networking opportunity.

With about half of the store dedicated specifically to men with a wide selection of casual dress shirts, tees, shorts, books, and masculine gifts, the shelves also stock men’s hats, watches, sports-related gifts, inspirational signs, and unique barware. The store’s classic Biba Lekker line of tees is an ideal Father’s Day gift for any man in our lives. 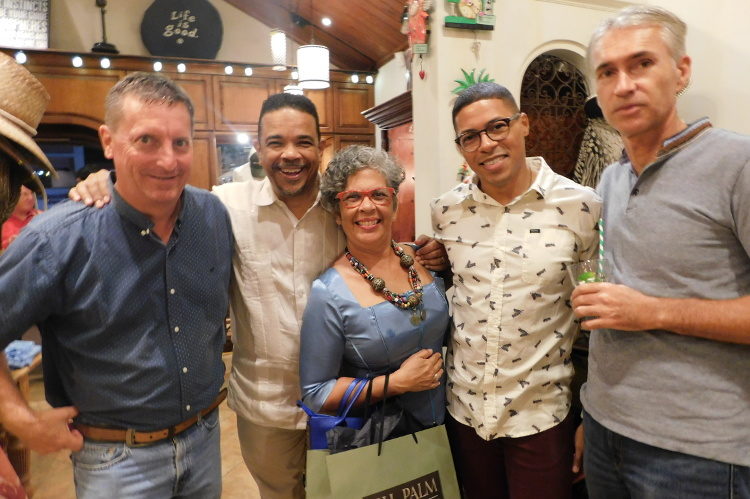 The gathering gave T.H. Palm & Company clients the opportunity to support the boutique’s Tikkun Olam (Repair of the World) program, now in its 11th year. Through this program, T.H. Palm & Company donates a percentage of every purchase to a local charity of the shopper’s choice from a menu displayed at checkout.

T.H. Palm & Company is open every day of the year from 9:00 am to 10:00 pm, including Father’s Day. The boutique is located in front of Playa Linda Beach Resort in Palm Beach.

“We’re very pleased with the results,” said Govert van der Hout. ”The tournament attracted the maximum number of golf players and almost twenty generous sponsors, who contributed enthusiastically to a great social cause.” 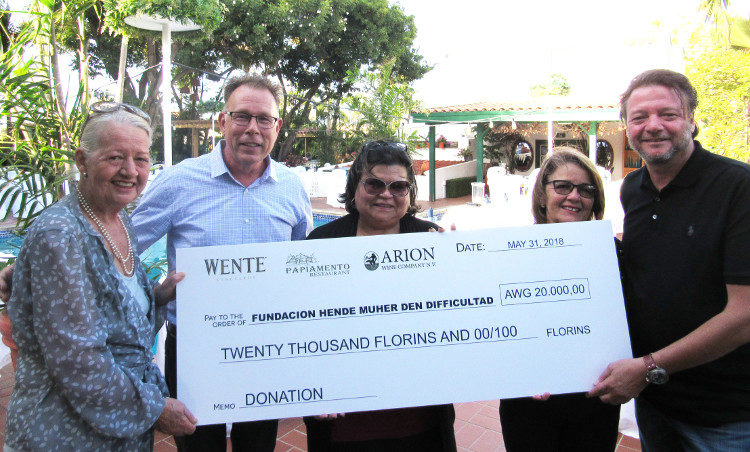 Arion Wine Company organizes the exciting tournament annually, with the active participation of Eric Wente of Wente Vineyards as the golf tournament host. Together with Papiamento Restaurant, the partners present a multi-tiered event over the course of one weekend each April.

The 2018 tournament opened with a golfers’ cocktail reception over delicious bites and free-flowing wines. Eric Wente greeted guests warmly and introduced the representative of FHMD, who shed light on the mission and work of the not-for-profit organization chosen to receive the funds collected from the tournament.

A full day of much-enjoyed golfing followed, with a noontime shotgun start. Players were treated to classic lunch prepared by Papiamento Restaurant, paired with nicely chilled bottles of Wente Vineyards. The tournament concluded with Julian Tucker and Maurice v/d Linden in the lead, Axl Ismael and Alexandra Brown in second place, and VJ Luidens and Gerald Sarmiento in third. 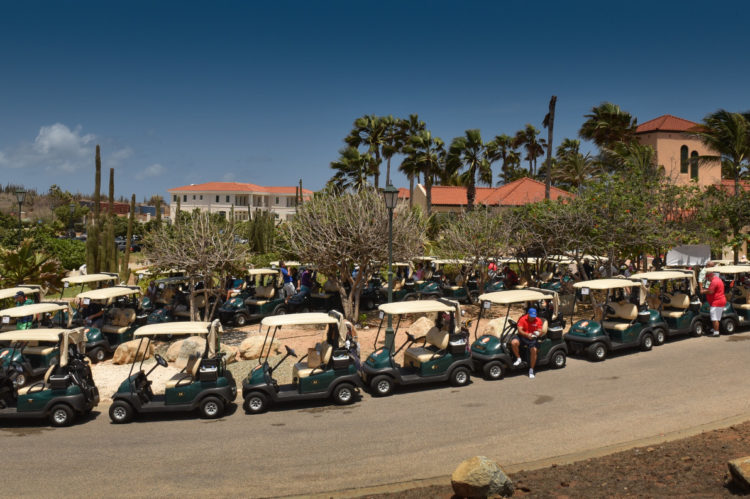