The Honorable Alfonso Boekhoudt, Aruba’s governor, was received at Tierra del Sol Resort & Golf Course by the general manager, Cisco Quant, and the chairman of Aruba Birdlife Conservation, Greg Peterson. Together they escorted him to hole #14, a signature hole, where Natasha Silva, Arikok National Park’s conservation manager; Gian Nunes, head of research for Arikok; and David Johnson of the Global Owl Project (GLOW) received him. The golf course employees and volunteers of Aruba Birdlife Conservation were already gathered there.

Almost three years earlier, Aruba Birdlife Conservation and Arikok National Park formed a partnership to rescue the shoco, an official national symbol, from extinction. They searched for an international partner and invited the Global Owl Project to join in their endeavor. A plan was made and together they then approached Cisco Quant of Tierra del Sol with the request to partner in Aruba’s first Shoco Conservation Project. 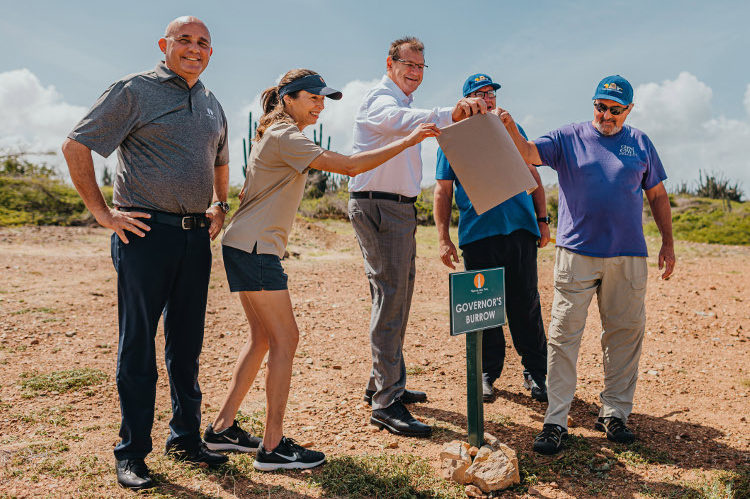 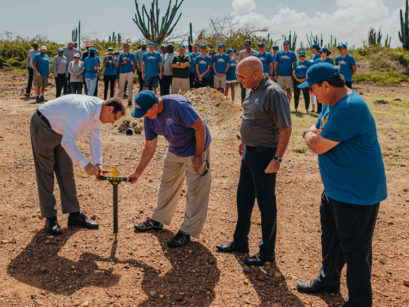 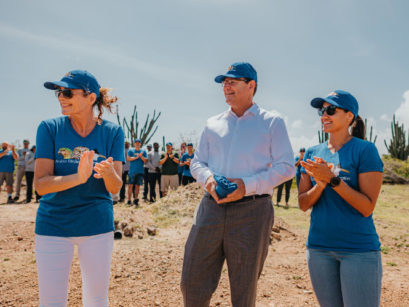 The governor receives an Aruba Birdlife Conservation uniform from the secretary of the board, Annette Peterson, and veterinary doctor/volunteer Stephany Wever.

The partners agreed that the time had come to launch this unique project. Tierra del Sol was ready to serve as the primary example of the Aruba Shoco Conservation Project.

The governor of Aruba is a profound nature lover who has taken an interest in the Shoco Conservation Project from day one. Just a few weeks ago, the governor paid an informal visit to Tierra Del Sol to be informed in detail on the progress made. During this visit, he discovered that a pair of shocos had moved in at hole #14, yes, at Tierra del Sol’s signature golf hole! It goes without saying that it was this artificial burrow site that was chosen for the launch.

On Saturday the ceremony took place and started with the reveal of a new golf course sign. Since it was the governor who discovered the shocos at this burrow, it will be named “The Governor’s Burrow.” To seal the launch, the governor placed a shoco perch in front of the artificial burrow.

Aruba Birdlife Conservation is grateful to the governor of Aruba and to Tierra del Sol for trusting their shoco conservation partners. Special thanks goes to the employees of Tierra del Sol for their ongoing assistance. Aruba Birdlife Conservation appreciates its partners, Arikok National Park and the Global Owl Project of the United States, for their contributions to shoco conservation in Aruba. Thank you, above all, to the fabulous volunteers.

Minister Ruiz-Maduro at the opening of Archaeological Museum

After being closed for almost two years, MANA, Museo Arkeologico Nacional di Aruba, is again open to the public, with Pancho Geerman as its interim director.

At the reopening ceremony, Ruiz-Maduro, minister of culture, announced that it is her intention to register MANA as an independent autonomous foundation, which will facilitate its sustainability in social, cultural, and economic areas within our community. 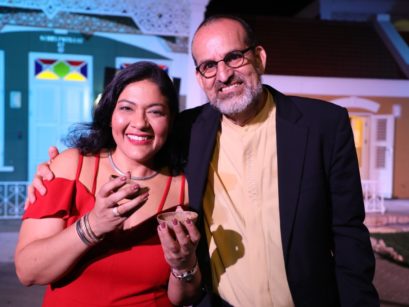 The Archaeological Museum is filled with important finds from various archaeological digs and preserves the island’s historical past. It is open in the heart of town, in some of Aruba’s most important reconstructed and preserved buildings, at Schelpstraat 42. 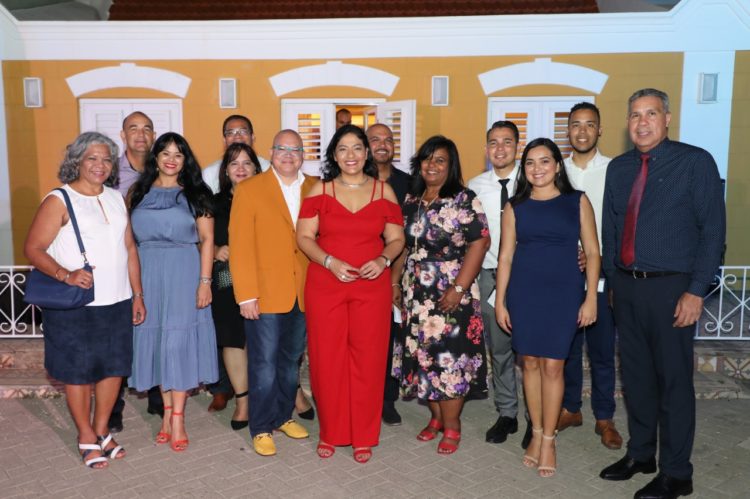 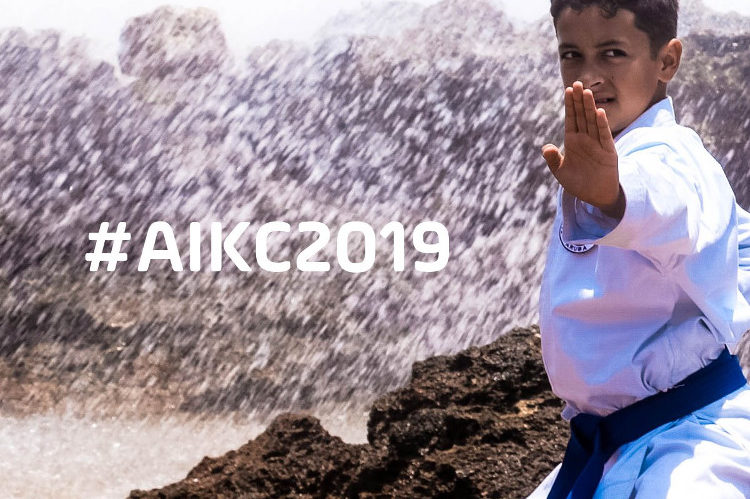 The program included exhibition fights and seminars by Douglas Brose (Brazil), a two-time world champion, and Damian Quintero (Spain), the second-ranking athlete in the world.

The organization hopes to promote karate and martial arts among young people on the island, increasing the number of those practicing the sport, now recognized as Olympic. 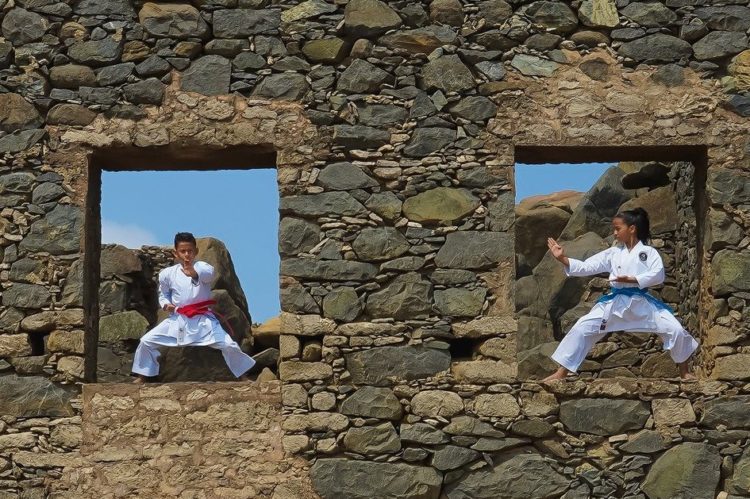 Samanta Westera-Juppa, founder and artistic director of Club di Movimiento Aruba, a dance school located at Bubali 76-B in Noord, wishes to inform dance lovers of the annual dance recital celebrating the school’s 22nd anniversary with this year’s theme: “The Oscars.” 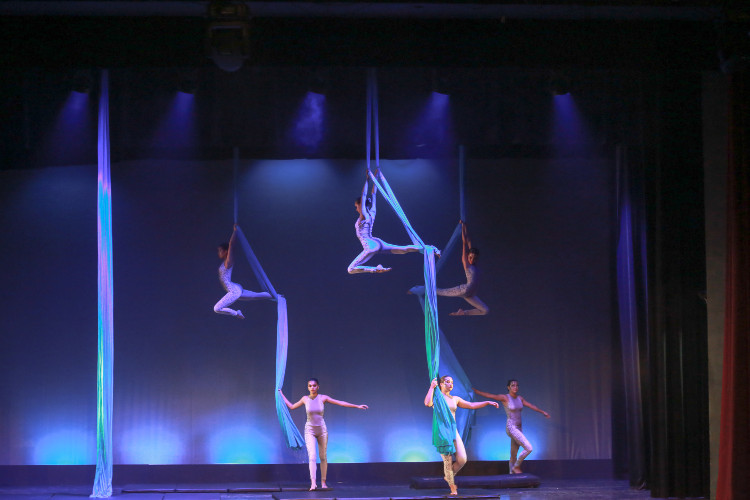 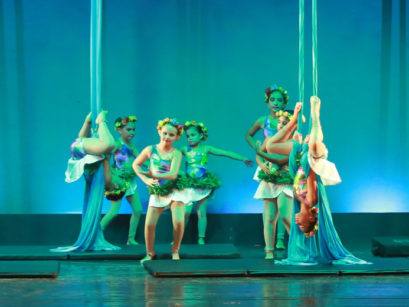 One Happy Bike Island Foundation, a small but passionate foundation, would like to increase awareness of the benefits of using bicycles in everyday life as well as increase the visibility of bicycle-related events on Aruba.

The foundation has the below upcoming free events dedicated to health and an active life during the last week of November.

You are invited to attend and/or participate in: