Ronda & Chuck: The Surprise of a Lifetime

Chuck and Ronda Davenport, from Roswell, Georgia, have been married for 25 years. They started having kids when they were still quite young and had never really gotten away as a couple since then. So Chuck wanted to do something really special for their 25th wedding anniversary and made a big deal about going away by themselves to celebrate this milestone.

The destination of Aruba was chosen, and Chuck and Ronda arrived at The Ritz-Carlton, Aruba on a Saturday. Before the trip, Chuck had told his wife that he had hired a professional photographer to take pictures of them on the beach to commemorate their anniversary on the Tuesday after their arrival, advising her to pack a nice dress. He also scheduled a spa day for her at The Spa at The Ritz-Carlton, Aruba on Tuesday to get ready for the photo shoot.

Little did Ronda know that the photo shoot was simply a ruse, and that Chuck was actually planning a vow renewal ceremony for the two lovebirds on Tuesday, and was flying their five kids down so that they could be part of the celebration as well. Ronda didn’t know her kids were there until she and Chuck were walking across The Ritz’s Eternity Bridge toward the beach for the renewal ceremony. She was massively surprised to say the least! 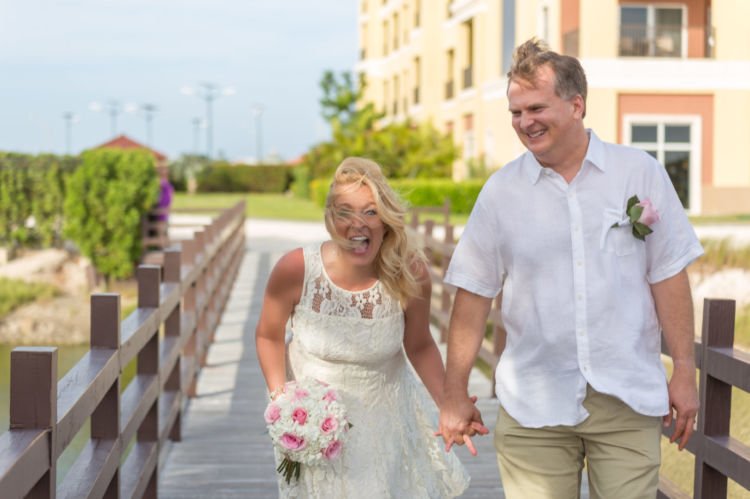 The Ritz-Carlton, Aruba’s Eternity Bridge leads to an oceanfront gazebo that sets the stage for gorgeous ceremonies with panoramic views of crystal-blue waters, tropical breezes, and stunning sunsets. As Ronda was enjoying treatments and primping at the spa for her “photo shoot,” The Ritz-Carlton team decorated the resort’s Eternity Bridge and beach gazebo with gorgeous white drapery, keeping the décor simple yet elegant. 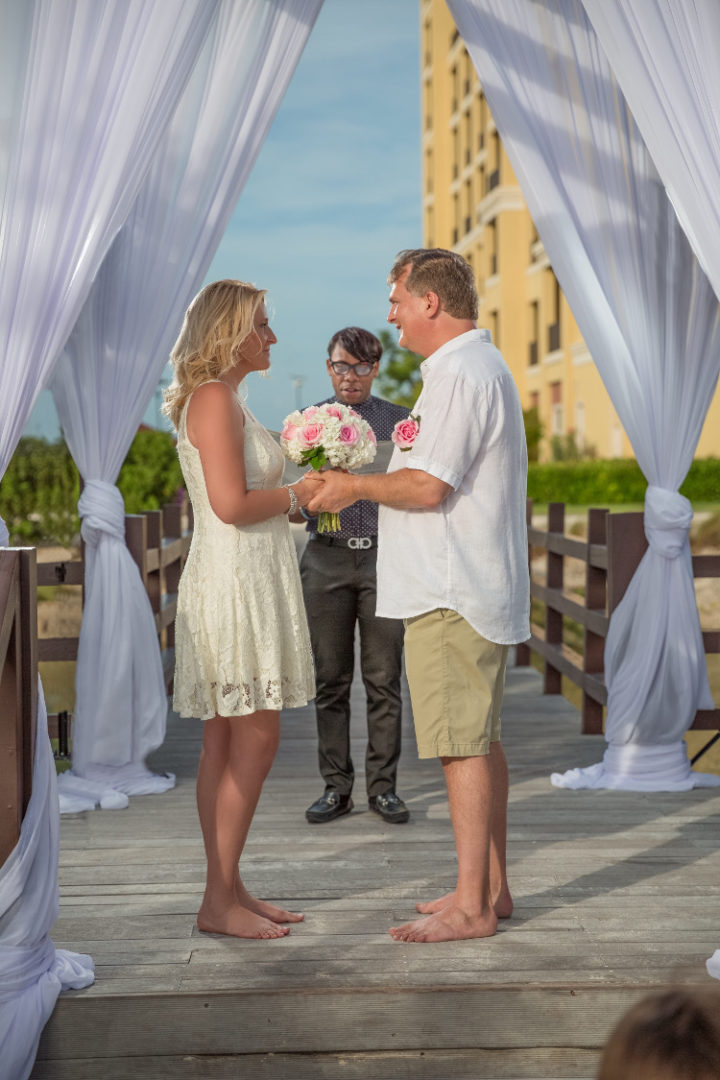 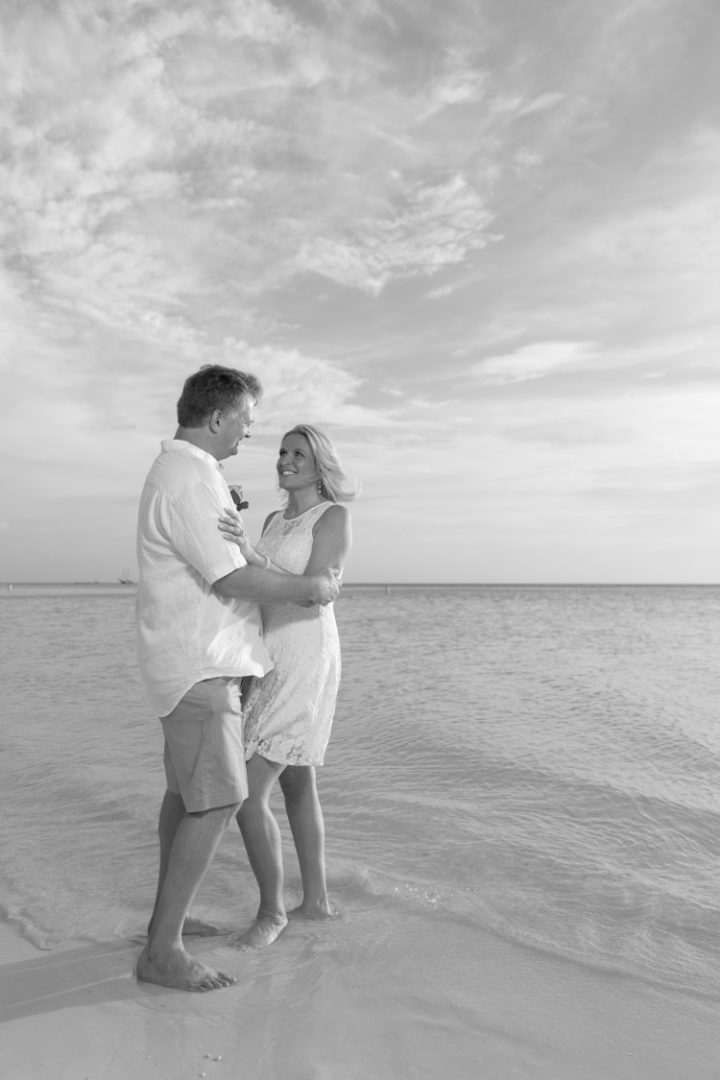 Holding a bouquet of white hydrangeas and pink roses, Ronda wore a cream-colored, above-the-knee sleeveless lace dress for the ceremony. Chuck opted for comfortable khaki shorts and a white linen shirt complemented by a boutonniere matching Ronda’s bouquet. As a final nod to their casual attire, the couple went barefoot for the ceremony.

Following the vow renewal ceremony, the couple and their children enjoyed a private dinner on the beach. The Ritz-Carlton team set a table for seven, lit by lanterns set in the sand surrounding the table. The red tablecloth ended up matching what Chuck calls “the most beautiful sunset I have ever seen”—a fiery display of red, orange, and yellow streaks across the sky. 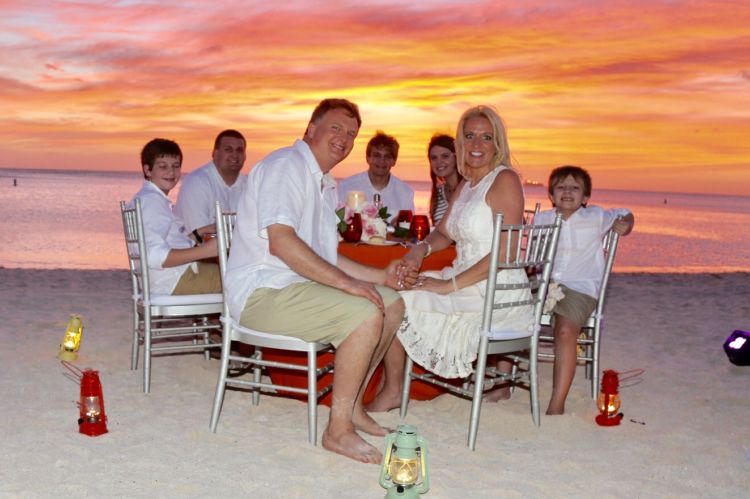 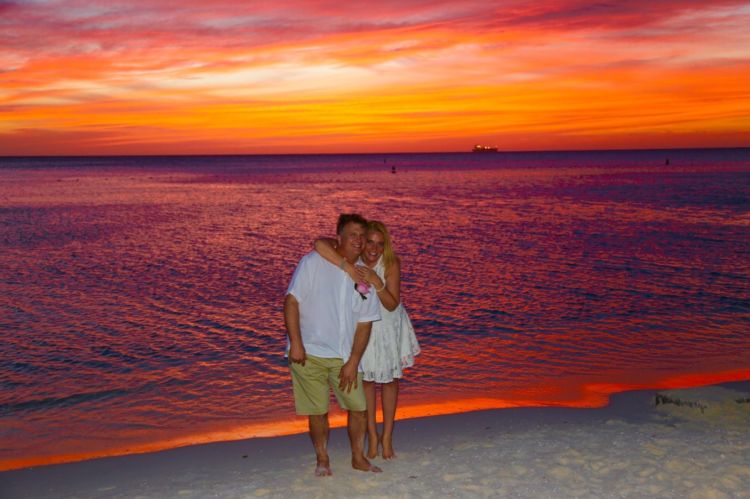 Dinner: On the beach at The Ritz-Carlton, Aruba

Hair & makeup: The Spa at The Ritz-Carlton, Aruba 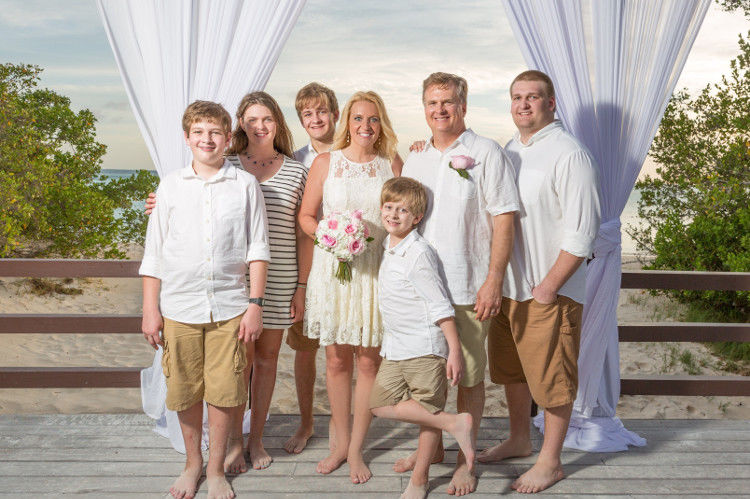 We chose Aruba because we were looking for a beautiful beach locale where we had never been that has consistent weather and lots of things to do. We ended up spending most of our time hanging around the hotel, as there were so many things to do, but on Wednesday, we did the full-day island tour with ABC Tours, which proved to be a great way to see the rest of the island.

The day of the ceremony was absolutely perfect. I give Gillany and her team at The Ritz huge credit for helping me pull off the surprise of a lifetime for my beautiful bride. 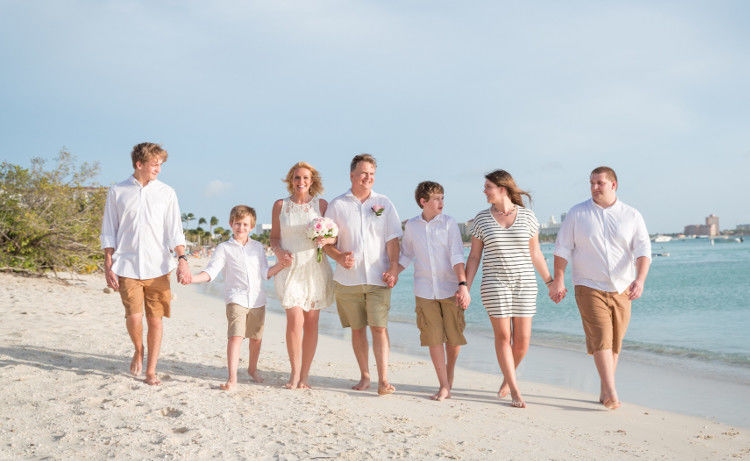 Weddings at The Ritz-Carlton, Aruba